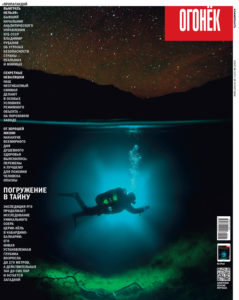 One of the most famous Viktor Lyagushkin’s photo from Blue Lake (Kabardino-Balkaria Russia) appeared on the cover of the magazine Ogonyok №40, October 10, 2016.

As a child, I was looking forward to meeting with the magazine, there were so many interesting things to read! And when it was read from cover to cover, we started to work a famous Ogonyok’s crossword. I now understand that the name of the magazine is foolish, in Soviet times it was used for printed media. But “Ogonyok” has become so iconic that now its name should be pronounced with aspiration. And to be on its cover is a great honor. But I caught myself on the fact that I do not want to read the material to which  the photograph relates, but more want to solve a crossword puzzle. Yes, the one on the last page.