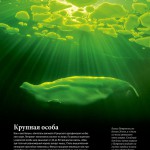 During our expedition to White sea, where we did a surprising discovery, Viktor made a shot of a 20 year old white whale named Petrovich. The beluga basked in the spring sunshine and was happy about spring coming.