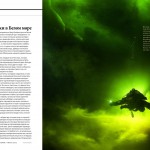 White Rivers in White Sea this is title of our publication in National Geographic Russia Magazine July 2013 about mystery phenomenon, which had been discovered by our team in April 2013 at Polar Circle.

Plunging under the ice of the bay Biofiltry on the White Sea, we found that the bay’s basin at 7 m deep seemed to be filled with smoke. At touch smooth interface between the transparent and whitish water heaved with swirls and its smooth contours restored only few hours later. “Smoke” had a strong smell of hydrogen sulfide.
Although hydrogen sulfide is used for medical purposes, such as hydrogen sulfide baths, the gas is very toxic. Even a small amount of hydrogen sulfide in the air inhaled causes dizziness, headache, nausea; and its significant concentration leads to coma, convulsions, pulmonary edema, and even death. For marine life hydrogen sulfide is as much as dangerous. Divers’ anxiety was clear, so they took samples of the water and turned to the scientists. The explanation was surprising and not simple.