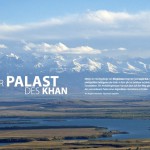 Me dear friends, we are happy to tell you about suspenseful feature in the Unterwasser Magazine #8 2014 about archaeological exploration of the Issyk-Kul lake, evolution of diving gear and searching of Tamerlan’s Palace on the bottom of the lake by National Geographic expedition.

Text: by me, Bogdana Vashchenko, photography by Viktor Lyagushkin. 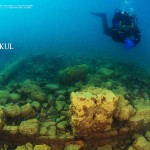 A big 9-page piece about history of underwater archaeology at the Issyk-Kul lake in Asian Diver Magazine, 2012, Issue 6, Volume 123

“The history of Lake Issyk-Kul is littered with secrets. It is said that nearly 1,500 years ago, a Chinese Buddhist monk went on a pilgrimage to India. Overcoming difficulties and dangers, the traveller came to a big lake about four miles into the mountains. This was the Issyk-Kul Lake, sitted amidst mountains and taking income from numerous rivers. The monk described the lake as being greenish-black, salty and bitter. Its sweeping waves would at times rise and attack the shore with irresistible force. The lake, said the monk, is home to dragons and fish, and sometimes, extraordinary monsters appear from the depths. That’s why travellers pray for others and their own welfare. While the inhabitants of the lake are numerous, no one dares to catch any.
But it is impossible to quash human curiosity and the thirst for knowledge. Since the 19th century, Russian scientists have been studying the ancient remains around Issyk Kul, which range from petroglyphs and 3,000-year-old kurgans (nomadic burial mounds) to early Christian monasteries and medieval cities. The lake itself also drew attention from researchers pertaining to certain remains that lie beneath its stunning cobalt waters.” 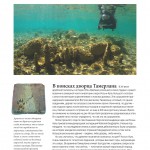 September 2012 we joined National Geographic expedition at Issyk-Kul Lake, searching for sunken Tamerlan’s Palace. It was really exciting adventure, we are looking forward to seeing a big piece in the National Geographic Magazine, and cannot tell you all the story. We should keep the secret.