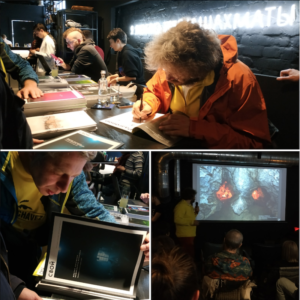 Viktor’s photography from the inhospitable Baltic sea in the Secret Spot section in Scuba Diving Magazine #5/2015. Russian Navy galliot Tobias Enge shipwreck, which crashed near Gogland Island on a stormy night 1771. Researchers believe the ship went down after a failed attempt to round the cape of the island, leaving no survivors of the 45-person crew. The Baltic Secrets of Shipwrecks Project has been featured on pages of very respected Russian magazine Motorboat and Yachting #5(23) September 2013.

Underwater treasures of the Baltic sea: archaeological findings and detective stories hidden under the water and the time.

Underwater America is a title of the piece on underwater archaeology by Alexander Grek, Editor-In-Chief of National Geographic Russia, illustrated with marvelous photography by Viktor Lyagushkin. The story about famous ship and UW archaeologists work on finding and identifying of shipwrecks.

Early on a sunny morning of August 6, captain Andrey Sinitsyn commanded to cast off a 53-tonne diving boat 311 heading for the western-most point of Russia in the Gulf of Finland – the island of Hogland. So the 71st underwater archaeological expedition of the project Secrets of Shipwrecks started.
This time, the main task was to search for the remains of America. Nowadays, only the lonely graves in an abandoned island cemetery remind us of her death.